Let’s make the word “basics” in the title of this post as prominent as possible. “Project Scheduling” – the term includes two words. If you don’t know what a project is, then you don’t really have a reason to know about project scheduling. If you do know and have a project, then the scheduling part is more important than ever.

But, what does that term actually mean – scheduling? Well, it’s fairly simple: ordering tasks in order to meet a deadline. Of course, in practice, that’s where the term becomes complicated. If you’ve looked at any of our previous posts, you’ll know what I mean by this.

So, let’s look at some new aspects of scheduling theory: de jure and de facto scheduling. While these terms may not be the “official” project management terms, they help us understand the scheduling process a lot better.

De jure, as you probably know, refers to the rule, idea, right or law. It is a practice that has been put in place, but not necessarily implemented. For example, I could have a project that involves writing 30 blog posts in 8 hours. That’s the de jure expectation, but if I only write 1 blog post for every 30 minutes, that expected schedule won’t work out too well.

This is where the de facto term comes in to play. If you didn’t know, you’ve probably guessed that this term refers to the reality of the situation because, in reality, not all expectations are realistic. People work within budgets and with certain levels of performance. These are variables that affect the amount of workers and resources a project has, as well as the time in which a project can be completed. So, while your project might have a deadline, the de facto deadline might end up contradicting the de jure.

That’s why CPM scheduling exists: to best manipulate the de facto to match the de jure. It’s a matter of assessing resources, setting boundaries and setting up a schedule that will most likely come true. 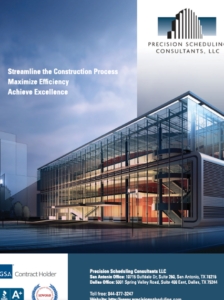 For a digital copy of our brochure, please enter your email below.